Rightwing religious groups have been mobilizing followers behind a new wave of abortion restriction bills crashing over state capitols in the North and South, crafted to ultimately overturn the 1973 Supreme Court Roe vs. Wade ruling legalizing abortion nationwide.

But the battle isn’t simply between religious anti-abortion advocates and a secular vanguard fighting to preserve abortion rights. Less visible, but no less vocal, are religiously grounded defenders of strong and expansive reproductive rights, as well as the rights of individual women—not the state—to make choices regarding the control of their own bodies…

‘It’s a Movement’: The Poor People’s Campaign heads into the future with a robust agenda, April 2019

Protesters join hands as part of the 1968 Poor People’s March on Washington. Their work continues through a new generation of activists across the country, including in Wisconsin. Photo courtesy of Poor People’s Campaign.

Wisconsin is one of more than thirty states where the Poor People’s Campaign has launched a chapter and seems to be on fertile ground. The state’s recent history of retrenched rightwing political muscle has made it a laboratory for policies that enrich corporate power and private wealth, escalating economic inequality and racial segregation. But those same forces have given rise to progressive popular resistance throughout the state, including last fall’s ouster of Republican Governor Scott Walker by Democrat Tony Evers.

Now the Wisconsin Poor People’s campaign is making a renewed effort to increase its visibility. And like the national campaign, it is focused on the long game, aiming for changes that will take years to achieve…

‘The Center of Gravity is in the Local Work’: Liz Theoharis on the Poor People’s Campaign, May 2019

An ordained Presbyterian minister and veteran social justice organizer, the Reverend Dr. Liz Theoharis co-chairs the Poor People’s Campaign with the Reverend Dr. William J. Barber II. Founded half a century ago by the Reverend Dr. Martin Luther King Jr., the campaign was revived in late 2017 by Barber and Theoharis to empower the nation’s poor and marginalized people, and help build coalitions to address their challenges.

In May and June of 2018, the campaign undertook “Forty Days of Moral Action” around the country to draw attention to poverty, militarism, injustice, worker rights, and other social injustices. In June of this year, the campaign will focus on Washington, D.C., gathering for a People’s Moral Action Congress…

A Republican Without a Party: Longtime Political Aide Breaks with Trump’s GOP, November 2018

For one longtime committed Republican, the midterm election results proved to be “modestly encouraging” — because of how well the Democrats did.

Joseph Britt of Sun Prairie spent a couple of decades working for Republicans, including for U.S. Sen. Bob Kasten and Justice David Prosser, when Prosser was the state Assembly Republican leader in the early 1990s. But Britt, who has worked in the private sector since the mid-1990s, has grown increasingly disenchanted with the Republican Party and its leaders over the past two decades.

Joseph Britt: “The party of Trump is the party of the Charlottesville white-right mob.”

Britt has been sharing his political change of heart with friends and on social media for a while, but with a 25-part tweetstorm on Oct. 8 he made a complete break with the GOP, declaring “I’m out.”

“What is there left of Lincoln in today’s Republican Party? Of Theodore Roosevelt? Nothing,” Britt wrote in the penultimate tweet from that thread. “The party of Trump is the party of the Charlottesville white-right mob, the party of concentrated wealth, and perhaps most of all the party that rejects responsibility.”

His digital cri de coeur generated more than 11,000 retweets and more than three times as many likes. It multiplied the number of followers he has a startling sevenfold, he says, now reaching 5,600 at last count.

One of Britt’s souvenirs from “time raising money on the phone for the Republican National Committee.”

… For the 60-year-old Britt, the GOP is all but unrecognizable from the one that caught his attention while he was growing up on Long Island in a modest middle-class community. He says he was a political junkie in a largely non-political family by the time he was a teenager. A few years after college he went to work on Capitol Hill as a legislative aide, eventually joining Kasten’s office to specialize in agricultural policy. Traveling around Wisconsin for meetings with Kasten’s farm advisors, he grew to love the Dairy State and eagerly returned to work for Prosser and settle down here a few years later. … 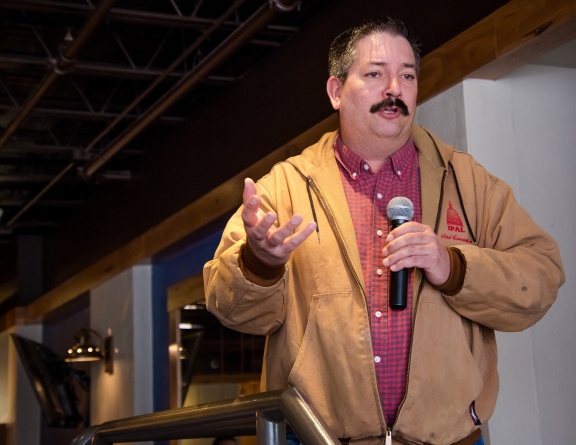 Countless politicians—even Trump himself—have run for office professing to champion the hopes, dreams, and perspectives of ordinary working people. The 2018 midterm election cycle has given birth to an army of insurgent progressive stars, from New York to Michigan to Idaho, with their own distinctive backgrounds and biographies.

Even in that crowded field, the solidly built, mustachioed construction worker Randy Bryce—popularly known by his Twitter handle, @IronStache—has managed to become one of the most-watched midterm election candidates, running for the Congressional district represented for the last twenty years by Republican Paul Ryan, now Speaker of the House of Representatives… 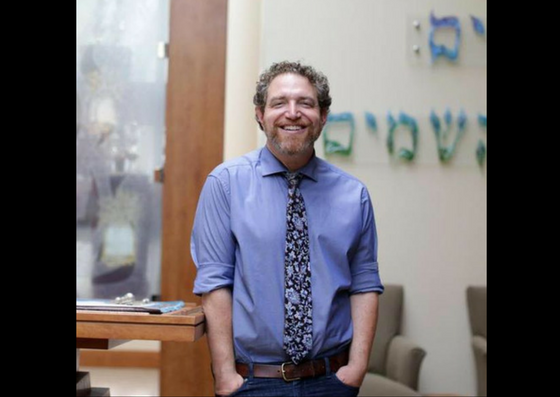 Rightwing Christians have found much to like in the Trump Administration’s advancement of their priorities, including opposing Planned Parenthood, restricting abortion, marginalizing gay rights and women’s rights, and favoring private school vouchers. And they were heartened by his appointment of conservative judge Neil Gorsuch to the Supreme Court.

But for other faith groups, Trump’s priorities have stirred alarm, and protest. Michael Rothbaum, a rabbi at a suburban Boston synagogue, guesses that his congregation of 280 families mostly vote Democratic. But few of them were what he calls “rally-goers” prior to Trump’s election. Then, he adds quietly, “absolutely, something shifted.”

William J. Barber II Responds to the ‘Call of the Moment’, January 2018

Photo courtesy of Repairers of the Breach.

The Reverend William Barber II has emerged as a leading voice in the struggle for rights for African Americans, the poor, and other marginalized people in the United States, especially in the South. In his former role as president of the North Carolina chapter of the NAACP, Barber led the “Moral Mondays” movement that enlisted a broad coalition of people engaged in human rights struggles.

Barber now heads Repairers of the Breach, a multifaith, nonpartisan nonprofit group also based in North Carolina, and cochairs along with the Reverend Liz Theoharis a new Poor People’s Campaign—a “re-engagement” of the movement of the same name that the Reverend Martin Luther King Jr. took up in 1967.

In late December, Barber spoke by phone with The Progressive about his involvements and how faith-based activists and organizations are responding to President Donald Trump.

Yet he has not turned his back on that world or the hundreds, perhaps thousands, of people who inhabit it. Instead, Michaelis is devoting his life to repairing the damage he feels responsible for and embracing the human diversity he once hated and feared. He hopes to encourage those flirting with that life to turn away before it draws them in, and help those locked into that worldview to find their way out…

On the Hard Path to Prison Reform: An Interview with Heather Ann Thompson, November 2017 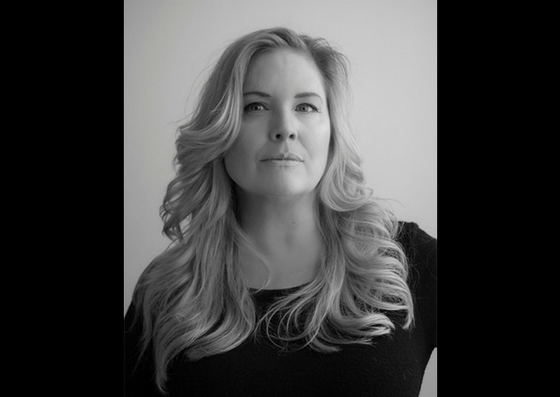 Dr. Heather Ann Thompson, professor of history and Afroamerican and African studies at University of Michigan.

Published in 2016, University of Michigan historian Heather Ann Thompson’s Pulitzer-prize-winning history of the 1971 Attica Prison Uprising, Blood In the Water, was released in paperback this fall. Thompson was in Milwaukee recently to speak at a series of events spotlighting mass incarceration. She spoke with The Progressive contributor Erik Gunn about the lessons of Attica and the prospects for decarceration in the era of President Donald Trump…

The Long-Lasting Effects of Redistricting in Wisconsin, October 2017

Following 2010’s Republican-friendly mid-term election and the decennial census, many states, including Wisconsin, rewrote their congressional and legislative boundaries to favor the right wing. Our state is also one in 37 in which legislatures (and by extension political parties) have final control over the maps, as opposed to special bodies. However, it had been decades since a single party had control of state government during decennial redistricting…

There’s a word for drawing districts that give a lopsided advantage to one political party – gerrymandering – and the Supreme Court ruled more than 50 years ago that it can violate the Constitution by making some votes worth less than others. But justices have fallen short of a consensus on how to measure and limit partisan gerrymandering, and attempts to get them to overturn state maps, whether drawn by Republicans or Democrats, have failed.

The video shows Randy Bryce sitting on a porch, chatting with residents, strolling with his arm around his 9-year-old son, then walking onto a construction site, hard hat on his head. The music swells toward a climax, and so does the man’s voiceover: “I decided to run for office because not everybody’s seated at the table. And it’s time to make a bigger table.”

With that video, union ironworker Randy Bryce kicked off his campaign against Ryan for Wisconsin’s 1st Congressional District. After just one day, the video helped raise $100,000, mostly in small donations, from around the nation.

Ryan is in his 20th year in Congress with a seemingly indomitable record at the ballot box. But Bryce is unlike anyone who has ever challenged him.

Can Bryce — if he wins the Democratic nomination — succeed in toppling the House Speaker in 2018? Some say no…

Protesters Convicted For ‘Parading’ Against the Death Penalty at the Supreme Court, June 2017

On an overcast day this past January, eighteen people stood on the steps of the U.S. Supreme Court and unfurled a banner that read “STOP EXECUTIONS!”

For that nonviolent act, all those involved were arrested under a law that makes it a crime to “parade, stand or move in processions or assemblages” or to display a “flag, banner or device designed or adapted to bring into public notice a party, organization or movement” on the marble plaza and steps of Supreme Court building.

This week, twelve of those eighteen went on trial in a case presided over by D.C. Superior Court Judge Robert Salerno. On Thursday, June 29, 2017, all twelve were convicted…